Giorgio Chiellini represents durability in football with the Italian defender defying the odds to keep playing at the highest level for Juventus. 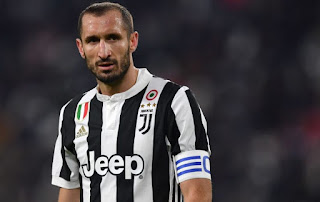 He will be 37 by August and should ideally have left the game or started playing for a lower level side.

However, he remains an important part of Andrea Pirlo’s Juventus team that has won the Super Cup and the Italian Cup this season.

He has had fitness problems in this campaign and one would expect that those should prompt him to consider leaving the game.

However, La Gazzetta dello Sport via Calciomercato says his future is yet to be written.

The report says the defender wants to keep playing after this season and had a meeting with Andrea Agnelli yesterday.

The Juve president didn’t talk about extending his stay beyond the current campaign, but that hasn’t stopped him from thinking about continuity.

It then adds that it is certain that he would still be playing football next season even if it isn’t at Juve, before touting him to make a move to the MLS.

Juve has been focused on signing younger players in the last few transfer windows and that could force them to allow Chiellini to leave.

However, the squad would need some experienced heads to help them in tough games and keeping Chiellini might be a smart move.