With their current midfielders struggling, Juventus will look to change things around at the end of this season. 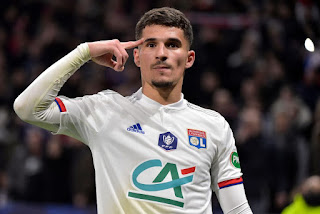 Several new midfielders have been linked with a move to Andrea Pirlo’s side and one of them is Houssem Aouar.

The Frenchman helped Lyon to eliminate Juve from the Champions League last season and has continued to make good career progress.

He was close to joining the Bianconeri in a swap deal last summer, but Federico Bernardeschi’s refusal to go the other way scuppered the deal.

This summer is another time for both teams to try to get the transfer sorted and a new revelation might make things easier for Juve.

Lyon CEO, Jean-Michel Aulas, has proven to be a tough negotiator who wants the highest price for his players.

This reputation means the transfer will be tough to pull off and Calciomercato says he would want between 40-45m euros for the France international.

However, Aulas has a gentleman’s agreement with the midfielder which would see him start the negotiations with a suitor at a reasonably fair price.

Adding Aouar to their team would be a major coup for the Bianconeri and if he can get used to what they need from him quickly enough, then Juve could have one of the league’s best midfields next season.

“I think the criticism of Pirlo laughable really” Former Juventus star comes to the...