Andrea Pirlo has been facing several problems in terms of squad selection, and the midfield area has been among his biggest headaches. 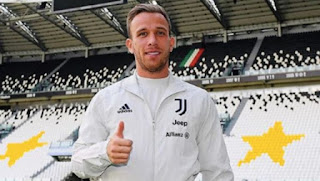 the Old Lady’s men in the middle of the park are Aaron Ramsey, Rodrigo Bentancur, Adrien Rabiot, Arthur and Weston McKennie.

According to Italian journalist Marcello Chirico (via ilBianconero), only two among the five are considered to be quality midfielders.

The Juventus-specialist journalist considers McKennie to the revelation of the season in the middle of the park.

The American is described as being ultra dynamic with a good view of the goal.

On the other hand, Chirico believes that Arthur is the other quality midfielder at Pirlo’s disposal.

The former Barcelona man had been exchanged with Miralem Pjanic, and the move seems to have been highly in Juve’s favor.

On the other hand, the journalist believes that Ramsey might possess the highest technical abilities among the group, but the Welshman is almost always missing with recurring injury problems.

The Author had less kind words to say about Rabiot, who was described as a slower player who never quite reached his earlier potential.

As for Bentancur, Chirico sees him as a decent ball interceptor. However, when he fails to regain the ball, he often ends up getting booked.

The report also mentions the Uruguayan’s tendency to commit costing mistakes, as witnessed against Porto.

The 23-year-old’s horrible back-pass allowed the Portuguese side to open the scoring within the first minute of the match.