Juventus managed to get rid of Sami Khedira in the last transfer window after he went through the first half of the season unused. 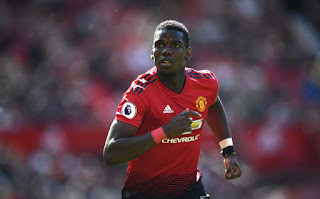 Ideally, they should have looked to replace the German, but that never happened and it has now been revealed that they have a summer plan instead.

Their current midfield has enough quality to challenge for the top prizes, but the Bianconeri will still add at least one midfielder in the summer.

Calciomercato says that their reluctance to look for a new one in this transfer window is because they have plans to land Paul Pogba.

The Frenchman had spent the earlier part of his career in Turin before he moved back to Manchester United.

He is in the final 16 months of his United deal and could be off in the summer.

The Bianconeri are hopeful that he will choose to join them instead of signing a new contract with the Englishmen.

Should he decide against a move back to Italy, the report says that Juve has plans to sign Houssem Aouar.

They have already informed the agent of the Lyon man about their interest in his signature.

Lyon has been open to selling Aouar since last summer, but a move for Pogba might cost less considering that he would be entering the final year of his United deal.

Three lessons we learned from Juve’s win at Sassuolo