Juventus are linked with a move to sign Lazio midfielder Sergej Milinkovic-Savic, with his current club in want of €80 Million. 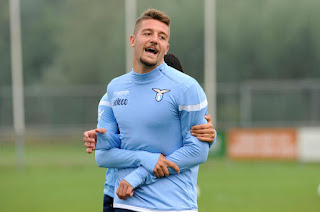 The midfielder has proven to be an assured Serie A star in recent seasons, having joined the Biancoceleste in 2015 before earning his name amongst the most consistent performers in the division.

Lazio News 24 cites Il Messaggero in claiming that Claudio Lotito will hold out for the full €80 Million asking price, whilst also claiming that Juve have stronger feelings towards the signing of Manuel Locatelli, which isn’t viewed as one which would block a move for the Lazio star also.

TheLaziali adds that the Old Lady are eyeing ‘youth and impactful’ players this summer in a bid to return back to the top of the division, with manager Max Allegri set to return to the fold after two years out.

I can’t personally see Juve agreeing to pay such a fee for Milinkovic-Savic, nor any other player in a straight-cash purchase at least, with the belief that our finances are yet to have recovered since the Coronavirus pandemic limited our income streams.

I imagine the club will have certain players that they will be looking to offload before they can invest heavily in the team, and with Adrien Rabiot showing his worth at Euro 2020, I imagine he will be viewed as a key player this season, hopefully with Manuel Locatelli ready to line up alongside him.

Should Juve be eyeing a big deal to bring in Milinkovic-Savic?