Juventus are claimed to be considering an overhaul of their squad this summer, with possible returning coach Max Allegri to ring the changes including making Paulo Dybala the focal point of our attack. 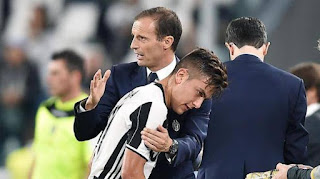 La Gazzetta claims that there could be a ‘sweet revolution’ in Turin this summer.

They claim that Allegri could return to rectify the problems which the club has suffered through the current season, with the Old Lady having failed to mount a serious title challenge this season, when they were supposed to be targeting a 10th scudetti consecutivi.

The report also claims that he will focus the attack of Juventus around Paulo Dybala, who has missed large chunks of the current season through injury and because of the Coronavirus. The Argentine has struggled for consistency after a number of times on the sidelines, but has earned his place in the hearts of the Old Lady with a number of passionate and impressive seasons previously.

This could well mean the end for Cristiano Ronaldo in Turin, with the Portuguese wanting the team to be build around him, something Allegri is supposedly not willing to do.

CR7 has been linked with an exit this summer already, and our potential absence from next season’s Champions League may strengthen the possibility of him leaving whether the club intends to keep him or not.

Three lessons we learned from Juve’s win at Sassuolo

Buffon wants to become a number one again and there is a team that...