Zamora Fútbol Club
Home Uncategorized Juventus preparing for Dybala’s departure even though there is little interest in... 
Paulo Dybala is set to leave Juventus soon as the Bianconeri struggle to get him on a new deal. 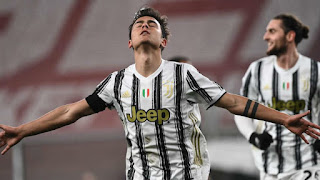 The Argentinean remains one of the important players at the club, but he cannot reach an agreement with the team over a new deal and negotiations have been at a standstill for some time now.

Caughtoffside reports exclusively that the club is now preparing to lose him in the summer or when his deal expires at the end of next season.

Dybala has had a troubled campaign as injuries continue to plague him.

He was set to return to action in the game against Torino yesterday, but he attended an illegal party at the house of Weston McKennie and the club has banned him from playing for now.

No one knows when he will play for the team again, but this season might be his last at the club.

However, a shortage of options might force him to remain at the Allianz Stadium beyond the current campaign.

One Premier League side that has an interest is Everton, but the attacker is set to reject a move to Carlo Ancelotti’s side.

If no top team moves for him, then he might remain in Turin and leave for nothing in 2022.