Juventus is thinking about taking Philippe Coutinho to Italy this summer as he continues to struggle for form at Barcelona. 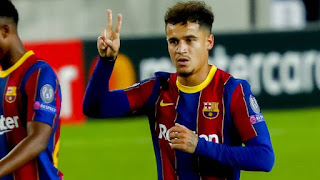 The former Liverpool man is one of the players Barca has told can leave the club in a bid to save cash.

They need to get some high earners off their wage bill to survive their current financial struggles.

ESPN via Tuttojuve says he could be returning to Serie A where he played for Inter Milan earlier in his career.

The report says he has interest from Juventus and AC Milan who want to add a new attacking midfielder to their fold.

Milan is reportedly the club with the strongest interest in his signature, but the report insists that Massimiliano Allegri needs a player with his profile at Juve.

Coutinho has struggled to make a name for himself at Barcelona, but he won the Champions League with Bayern Munich in 2020 and he starred in a knockout game against Barca on their way to that triumph.

Juve is in the market for a new attacking midfielder and they have been negotiating a move for Manuel Locatelli with Sassuolo.

With Barca keen to offload him, Juve could get a good deal from them in signing Coutinho.