After pulling off a major swap deal with Barcelona last summer, Juventus were considered to be the obvious winners on the market, when they traded the services of Miralem Pjanic for the younger and more dynamic, Arthur Melo. 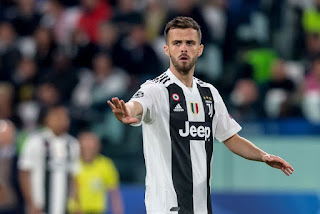 And yet, less than twelve months later, the Old Lady seems to be eager on bringing back her former midfielder – especially following the return of Massimiliano Allegri.

The Brazilian underwent a surgery on Friday, and he’s expected to be out for the next three months, leaving the Bianconeri short in the middle of the park.

Manuel Locatelli should eventually complete his move from Sassuolo, but he could be deployed as a box-to-box midfielder by the returning manager, which means that a Regista would still be needed.

According to la Gazzetta dello Sport, Juventus will try to conduct another exchange deal with the Blaugrana, this time offering Aaron Ramsey’s services in the attempt of bringing back Pjanic.

The Bosnian’s first season in Catalunya was a large disappointment, and things aren’t expected to improve for him under Ronald Koeman’s watch.

Barcelona are trying hard to lower their wage-bill in order to make enough room for Lionel Messi’s expected contract renewal, and the 31-year-old has been highlighted as one of the expected departures.

Nonetheless, is remains to be seen if the Catalans would be enticed by the prospect of adding Ramsey to their ranks – as his performances in Turin have been underwhelming as well.

Moreover, the current high wages of both players could prove to be an issue for the two clubs, which makes this swap deal a little complicated.