Federico Chiesa was one of Italy’s heroes as they won the Euro 2020 by beating England yesterday in the final at Wembley. 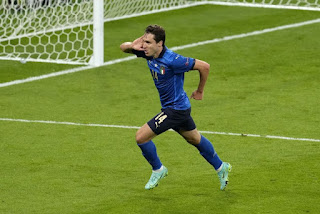 The Juventus man started the game and was involved in the good things the Azzurri tried to achieve on the attack.

He, however, couldn’t finish the match and was replaced by Federico Bernardeschi with about 10 minutes of normal time left to play.

It has now been revealed that he had to come off because he had sprained his right ankle.

Calciomercato reports that the attacker was injured when he tried to enter the England penalty box and made contact with Kyle Walker who was defending against him.

The report says he tried to play on, but couldn’t and Roberto Mancini was forced to take off one of his best players in the competition and replaced him with his club teammate.

That was the second major injury problem Italy suffered in the knockout stage of the competition after Leonardo Spinazzola got injured in the quarter-finals against Belgium.

Thankfully, his other teammates still went on and got the job done after beating the Three Lions on penalties.

It remains unclear how long Chiesa would be out with the injury, but the Bianconeri will hope he recovers before he’d return from holiday to join his club teammates for the new season.