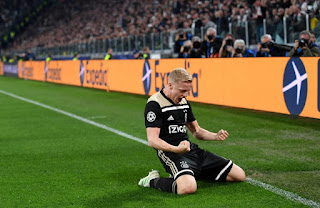 According to Tuttosport (via ilBianconero), Juventus are monitoring the situation of Donny Van de Beek in England.

The 23-year-old was considered amongst the most promising young players within the Ajax side that shocked the world by eliminating Real Madrid and then Juve on their road to the 2018/19 Champions League semi finals.

Whilst Frenkie de Jong and Matthijs de Ligt completed their big money moves towards Barcelona and the Bianconeri respectively in the summer of 2019, Van de Beek followed suit a year later when he joined the red devils.

Unfortunately for the central midfielder, he’s been having a torrid time in Manchester, failing to break through Ole Gunnar Solskjaer’s starting lineup.

The Dutchman has made 13 Premier League appearances this season, but only two of them from the start.

Therefore, an early exit seems to be on the table for the former Lancer who landed in England after completing a transfer that was worth around 39 million euros.

However, if the Old Lady are indeed interested in linking up Van de Beek with his former teammate de Ligt, it remains to be seen whether they will be willing to splash some cash next summer, or perhaps find a safer route – basically an initial loan with an option to buy.

The midfielder’s club struggles have obviously affected his international career as well, as he was only given 24 minutes of play during Netherlands’ first three World Cup qualifiers