Federico Bernardeschi has crowned a tough year by winning Euro 2020 with the Italian national team. 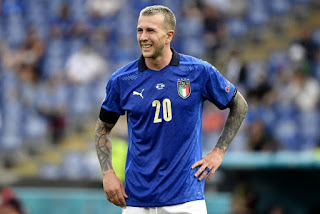 The midfielder had been out of the first-team plans at Juventus for much of last season and when he did feature, Andrea Pirlo almost always played him out of position.

He has been tipped to be sold by the Bianconeri repeatedly, but the return of Massimiliano Allegri might give him a new lease of life at the club.

Despite struggling to feature at club level, the former Fiorentina man still keeps the trust of the Italian national team manager, Roberto Mancini and he was picked for the Euro 2020 squad.

He played his part as the Azzurri emerged as winners of the competition and he has now recalled how tough the year had been for him before the win.

Speaking after the penalty shootout victory over England, a tearful Bernardeschi admits that he suffered so much last season while praising his national teammates for their efforts.

“We deserve all this,” Bernardeschi told RAI Sport as quoted by Football Italia.

“Personally, I suffered a lot, it was not an easy season for me.

“When you play such a season, things sometimes get complicated. But I only know one method: to work and roll up your sleeves, even when things are not going well.

“Thanks to my teammates, the staff, all those who believed in me… we are at the top of Europe, and I could not have been repaid in a better way. We have never been afraid of not making it.

“From the second minute we always believed in it.”