Juventus has been linked with a move for Udinese midfielder, Rodrigo De Paul and they have now received a minor boost. 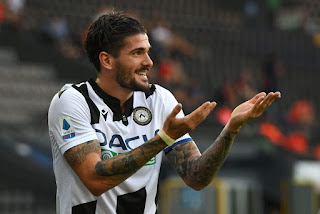 The Argentine is the key man in the current Udinese team and they would ideally not want to lose him.

However, the coronavirus pandemic has hit them hard in the pocket and offloading some players is the perfect way to raise funds for their survival.

Sky Sport Italia via Football Italia says Udinese wants to sell him now and they have even lowered their asking price for his signature.

The midfielder was heavily linked with a transfer away from the club last summer, but his pregnant wife didn’t want to move countries or cities at the time.

He is now set for a move and the report says he has interest from the likes of Inter Milan and Napoli as well.

Udinese had previously wanted around €45m for his signature, but the report says they have lowered that price to €30-35m.

The 26-year-old has been a very important contributor to their season with 9 goals and 11 assists in 36 games.

Juve’s midfield has performed below-par this season and adding him to their squad could give them a distinct edge in the next campaign.